We use cookies to give you the best possible experience. By using our website you agree to our use of cookies. We can notify you when this item is back in stock. Gena Showalter. Harry Turtledove.

Uh-oh, it looks like your Internet Explorer is out of date. For a better shopping experience, please upgrade now. Javascript is not enabled in your browser. Enabling JavaScript in your browser will allow you to experience all the features of our site. Learn how to enable JavaScript on your browser. NOOK Book. It was supposed to be an easy mission. An in-and-out job. A one-day extraction. His boss had fed him that line of bullshit, and Grayson James had foolishly believed him. Upon first entering this lushly green, sea-kissed land known as Atlantis, however, Gray realized he would have had better luck trying to sell a Frigidaire to a goddamn Eskimo.

At a goddamn jacked-up price. Not a myth. Damn it. He'd hoped otherwise. He scowled. In one hand, he held a beeping, miniature GPS system programmed from coordinates found on a map. An actual, honest-to-God map of Atlantis his boss had discovered in a missing millionaire's stash.

Right now, the GPS signal bounced off the earth's magnetic core, helping him navigate his way through this Atlantean jungle. In the other hand, he gripped a machete.

The sharp silver blade hacked at the thick foliage blocking his path. No, Atlantis was not a myth. It happened to be home to the most loathsome creatures he'd ever encountered. Made him wonder why he'd even joined the agency. He knew the answer, though, and it wasn't because he'd secretly watched Star Trek for most of his teen years and knew how to speak Klingon. Today is a good day to die. When he'd learned to his horrified shock that there actually were other colonized worlds in the vast expanse of the galaxies, he'd left his job as a detective with the Dallas PD and began searching for a Men in Black-type operation.

When OBI finally contacted him he'd signed on immediately. He believed fiercely in the need to learn about these otherworlders and protect his own planet from them. How could he have known that the most fearsome creatures of all resided here, on his own planet? Simply buried beneath the ocean, protected by some kind of crystal dome? As he dodged a stray limb, he ground his teeth together.

Luck had been on his side as he stealthily maneuvered his way past them, unnoticed, and entered this jungle. That's when he kissed that fickle bitch Lady Luck goodbye. For the past two nights, a blood-sucking vampire, a fire-breathing dragon, and a hungry, salivating winged demon, aka the Welcoming Committee, had chased him, each sharpening mental forks and knives. The memories made him feel all warm and fuzzy inside. He knew the routine now.

In less than one hour, night would fall and those…things would emerge again. They would hunt him. They would attempt to fucking eat him. And not in a good way. His blood ran cold at the thought and not even the hot, humid air could warm him. For fifty-eight hours he'd been stuck in this seemingly never-ending maze, and for fourteen of those hours, he'd followed the exact same pattern: creatures track, Gray evade. The first night, he'd tried to shoot them with his Beretta.

He managed to nail the dragon between the eyes, but his other pursuers dodged the bullets, quickly and effortlessly gliding out of range. The second night, when the two remaining creatures appeared, Gray utilized his combat skills and slit the vampire's throat.

A pleasure, he had to admit, but he hadn't emerged unscathed. Five deep, raw scratch and bite wounds adorned his neck and thigh, throbbing constantly. Not festering, but never quite healing. How he'd escaped the demon after that, he didn't know. Injured and weak as he'd been, he would have been easy to overpower. Hell, his bleeding body would have made a delicious dinner buffet.

Many times he'd wondered if the demon had purposefully let him go, enjoying the thrill of the hunt a little too much. Well, the demon wasn't the only one who was going to enjoy himself tonight. An anticipatory smile lifted Gray's lips. Smarter now, he wouldn't be caught off guard. Plus, he'd already worked up a plan affectionately dubbed Operation Kill the Bastard. If KTB unfolded successfully, the demon would soon join his bloodsucking friends in hell.

He'd sprint like a madman and hide until light glowed once more from the seemingly alive dome above. His gaze flicked to said dome. There was no sky here, only mile after mile of iridescent, pearlized crystal. Waves constantly washed over the outer side, and multiple-sized and colored fish swam in every direction. He like the naked mermaids best. A twig slapped his cheek, snagging his attention, slicing skin and adding one more item to his growing shit list.

He lost all remnants of his good humor. At least the insects had stopped swarming him. A real silver lining, he thought bitterly. He never should have taken this job. He veered left just as his wristwatch vibrated. He stopped abruptly. If it wasn't one thing, it was another, and now it was time to check in with home base. He dropped his backpack, dug inside, and withdrew a small black transmitter, switching it to On. If he failed to check in at least once a day, the cavalry would sweep in and finish his job.

He'd never failed a mission, and he wouldn't fail this one. His unit had thought it was funny as hell, saying he swooped into other worlds and left little presents like bombs and dead bodies , so the name had stuck. All was well, his ass. To survive Operation KTB himself, he needed to find a small clearing with ample room to sprint, dodge, and dive for cover. So far, no luck. And he was running out of time, his hour ticking away unmercifully.

When a wall of trees blocked his path, he pivoted right, but the GPS erupted in a series of erratic, high-pitched beeps, a sign he'd taken a wrong turn. Growling low in his throat, Gray spun around and backtracked until the miniature device calmed. Sweat trickled from his temple and dripped onto his military fatigues. He'd been due a vacation, damn it, a chance to see the brothers and sister he hadn't visited in over two years.

Unless he wanted to have a one-night stand with a three-eyed, blue-skinned, slimy alien female. He didn't. He'd never liked one-night stands, preferring instead multiple nights with multiple orgasms. Three eyes? Slimy skin? Uh, gross. Did he mention that he liked to take his time with a woman, lingering over every nuance of her body, savoring her scent, her taste?

Jewel of Atlantis - By Gena Showalter

We use cookies to give you the best possible experience. By using our website you agree to our use of cookies. Gena Showalter. Harry Turtledove. Bob Mayer. Christopher David Petersen. 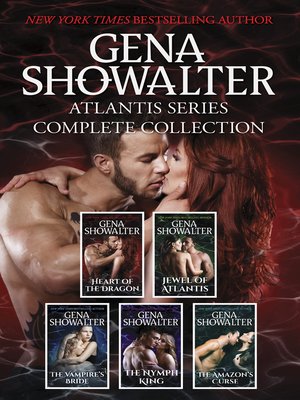 Series: Atlantis 2. Genres: Romance , Fantasy. Free Novels Online Free Books to read online. All characters in this book have no existence outside the imagination of the author and have no relation whatsoever to anyone bearing the same name or names. They are not even distantly inspired by any individual known or unknown to the author, and all incidents are pure invention.

Any cookies that may not be particularly necessary for the website to function and is used specifically to collect user personal data via analytics, ads, other embedded contents are termed as non-necessary cookies. It is mandatory to procure user consent prior to running these cookies on your website.